We would advise that the property problems can be very specific to the area and location of the property, or even the direction it is facing, i.e. north, south, east or west elevations can each have their individual problems. The defects and problems also relate to the mixture of building materials used, this can range from small repairs to where alterations and extensions have been carried out, and, of course, the age and general standard of the original construction and any additional maintenance that has taken place on taken place on the property. Having said all of that we have given you a general indication of the typical problems that traditional Tudor timber framed properties have, which we hope will be a useful free guide.

Interestingly, timber frame properties do not necessarily enable you to see the timber frame. The timber frame can be hidden with the render, hopefully, a parjeting lime based render, as opposed to a modern cement based render. There are several cases where Surveyors have been sued where they have not identified the problems of a cement based render on a timber frame and how it can accelerate rot, particularly if it hasn’t got any details, such as a bell mouth detail to the base.  This is why it is essential to ensure that the Surveyor you book has expertise in this area which all our Listed Building Surveyor have matched with many years of surveying such buildings.

Getting back to what they look like, they are fairly rectangular and low. Many of them wouldn’t have had a first floor and this has been added at a later date. Then you find you will get rooms in the roof, often known as eyebrow roofs. The traditional view of a timber frame building is a black and white timber structure, often box frame, where you can see the square boxes of the timber and also the relatively tall, triangular crucks frame properties.

When considering high level problems to a Tudor timber frame property it means that scaffolding is likely to be required or some form of access platform, be it from a cherry picker or hoist. This can often be where the main costs are when carrying out a project, as health and safety requirements on a building project which is of the upmost importance.

Chimneys were added after the original construction, in most cases, with the original chimney being, literally, a hole in the roof, or in the gable ends of the property, depending upon the type of property. A chimney was very much a modern accessory. The adding of a chimney can sometimes be an issue (has been an issue for many years) with rainwater getting in where the chimney joins the main roof and general spalling of brickwork, particularly where a soft red brick has been used or where a cement mortar has been wrongly used for repointing. We have also found that aerials fixed by wires, or screw fixed, can cause point loading and lead to deterioration of the chimney. 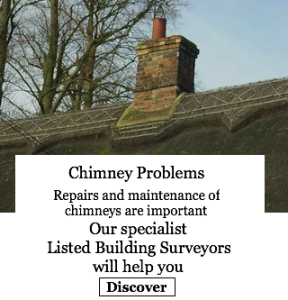 How do I find out if my building is Listed?